Five Steps to Prepare for Your Nonprofit’s First Capital Campaign 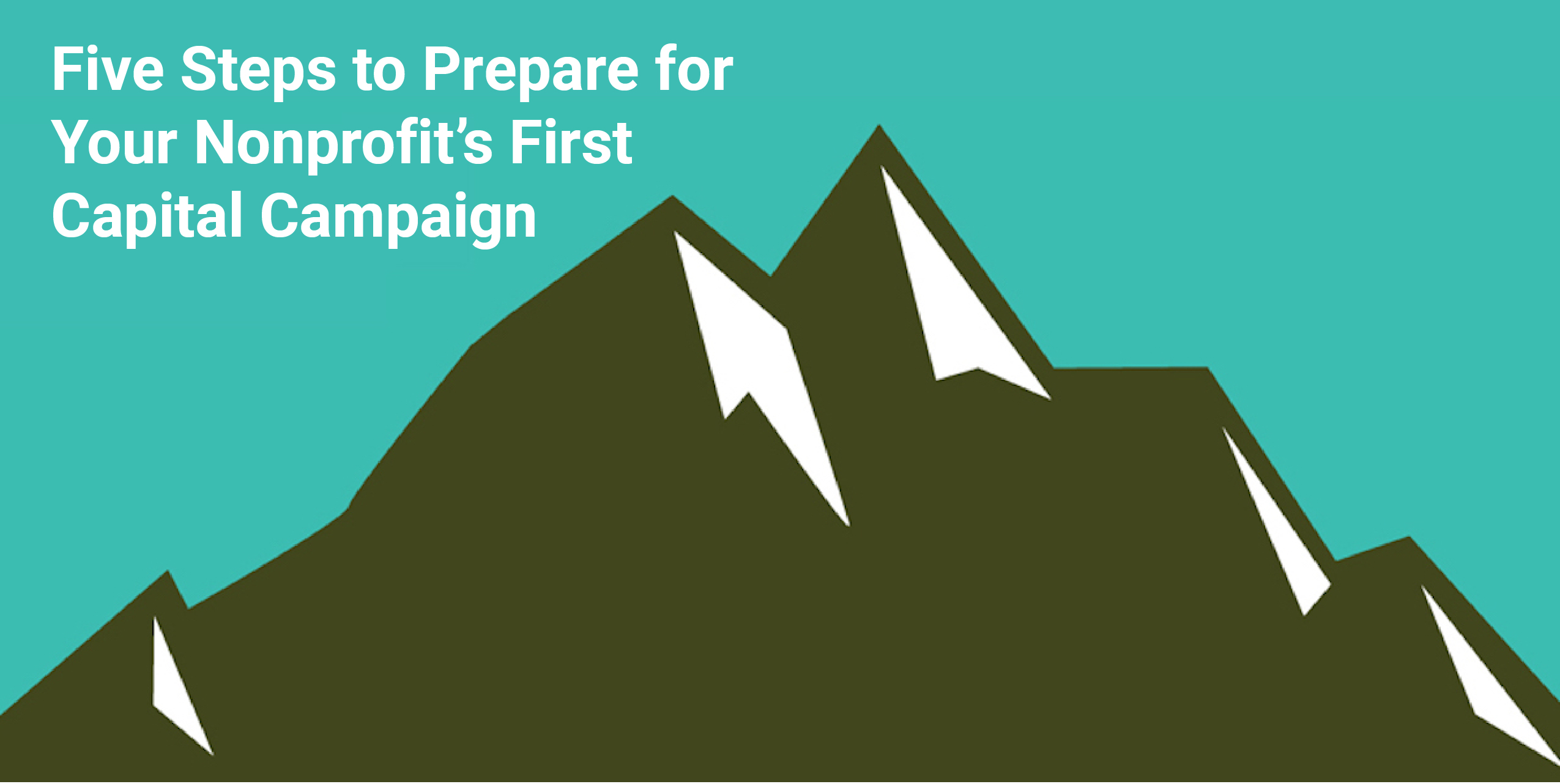 Capital campaigns are one of the most extensive campaigns that an organization will ever
undertake. In most cases, an organization needs to fund capital purchases, upgrades, and/or renovations and repairs. Given their highly episodic nature, organizations that are seeking to undergo a capital campaign must do so with foresight and preparation geared to success. The most critical steps are taken before even the actual capital campaign plan is drafted and far before an actual solicitation happens.

Organizations that are embarking on their first-ever campaign or who have not undergone such intensive efforts in a while would be wise to take heed of the following preparatory steps to ensure their ultimate long-term fundraising success.

1. Ensure that you have enough donors and prospective donors

The success of large campaigns is highly dependent on having an ample donor and prospective donor base. With such large campaigns, experts estimate that at least 10 to 15 gifts comprise approximately one-half of the campaign goal. Thus, an organization that is seeking to conduct a capital campaign must ensure that it has the breadth and depth of a significant donor and prospective donor base with people motivated and capable of giving.

While the numbers of donors and donor prospects are essential, a more in-depth analysis of the health of the donor base should be investigated. Donors should be actively engaged in the group's mission and have already shown a pattern of philanthropic commitment to the organization.

It is absolutely critical that any organization considering large capital campaigns ensures an evaluation of the number of donors and prospects and their readiness to participating in such an intensive effort.

2. Ensure that your organization as a whole is ready for a larger campaign effort

What does it mean for an organization to be ready? Well, there are several key benchmarks that an organization should have in place before considering a larger campaign effort.

For starters, the organization should be examining its current Board of Directors to ensure that they are engaged and committed. At its very heart, every single member of an organization’s Board must be a willing participant in a larger campaign effort.

If further Board development is needed or has been in the talking stages, now is the time to shore up this organizational aspect. Without strong voluntary leadership, the organization’s efforts are doomed to failure without even having gotten a decent start.

Organizations that are considering embarking on a more significant effort must also look at its relationship to the community. If the organization has been somewhat insular, it needs to take concrete steps to build stronger relationships before moving forward. A capital campaign, after all, is a community-focused effort, and given such requires the bandwidth of networks and a presence for it to be successful. An organization’s capital campaign efforts must originate from an overall larger organizational plan. If it does not, the organization must stop and think about long-term vision and goals and how the proposed capital campaign effort fits within that overarching strategy. Donors will not be as receptive to a planned campaign that does not tie into an organization’s strategic vision for the
future. With such significant investments at stake, a broader overarching vision must be in place before efforts commence.

Additionally, these more extensive plans must have smaller sub-sets of plans that outline the specifics of the proposed project, costs associated, other possible areas of revenue besides the capital campaign effort. They should also outline what operating costs will be in the new or renovated facility, and how the organization has prepared to raise the additional revenues needed for increased operating expenses such as staffing, utilities, maintenance, and other needs as a result of a larger or newer building.

3. Get your development program in order

A campaign is a considerable effort and, thus, an organization needs a high-performing
development function in operation. Before a campaign is an excellent time to conduct an audit or assessment of your current development program to ensure that the program is optimally operating.

This assessment would be a good time to bring on an outside consultant who can assist in the process of objectively measuring the program to determine its optimal operations in several key areas.

Those areas to be looked at include administration, development program administration,
staffing structure, annual giving efforts, major gift efforts, grants and foundations, planned giving, prospect research, IT, gift acknowledgments and stewardship, donor relations, voluntary, and communications. A proper development audit will examine areas, both internal and external, of the organization and will make recommendations for improvement.

Additionally, a good consultant in preparation for a capital campaign will also examine critical indicators of an organization’s readiness to undergo a more considerable capital campaign effort. For a significant campaign, an organization will need a Case for Support, a history of giving by donors to the organization, sound administrative systems, marketing, an active and engaged Board, and the potential for substantial campaign leadership both at the voluntary and the fundraising level. Additionally, as noted above, an organization should have a long-range plan in place with a vision for the future, which
must include active stakeholder participation.

4. Put a plan together: Ramp up your development

A consultant may take this analysis even further by initiating a plan for development that will “Ramp Up” efforts between the time an assessment or audit is conducted leading up to the planned capital campaign. This development plan will methodically suggest the steps and timelines required to begin building the infrastructure to mount a more significant fundraising effort.

A development plan may recommend such things as software needs, staffing, gift accounting, and acknowledgment systems, Board governance, Case for Support development, voluntary leadership development, prospect research systems, grant writing, etc. Additionally, a development audit and planning process will identify key organizational challenges that may be impacting the organization not related to fundraising but yet will still impact a possible future campaign. This evaluation should also take into consideration how the organization functions overall and seek to identify organizational hurdles that it faces which keeps it from conducting business optimally.

5. Do your homework: Pre-campaign planning

Before you begin a significant campaign, you must determine for what you are going to be
raising money. What are the ultimate goals of your project? How much is needed to fund this effort? Is this meeting a definitive community need?

It is also essential during this pre-campaign phase for an organization to reflect on any past
campaigns and how successful or not that they were. It should ask questions such as - what worked? What didn’t work? What campaign model was used, and how effective was it? What were the strengths and weaknesses of the campaign process?

Additionally, one crucial element that needs examining is how the community perceives the organization and if the community you’re raising funds for is in support of your efforts. If the community is not in favor of the efforts, you may be able to raise major gifts, but you will have a difficult time garnering more widespread support from the broad-based community.

A Feasibility Study is an essential part of the planning process, ultimately leading to
the recommendation that may cause the organization to forego a campaign, move forward with an altered goal or go full-steam ahead with the confidence that the organization will be successful.

For most organizations, a capital campaign is an episodic campaign, mounted only occasionally in an organization’s life cycle. Thus, it is imperative that an organization carefully consider a multitude of different factors before moving full-steam ahead into campaign mode. The key to an organization’s Capital Campaign success is to do the due diligence needed for a successful effort ultimately.

Here are the key steps that an organization needs to take before beginning fundraising for a Capital Campaign.

Are you ready to fundraise for a major capital effort? For more on how to plan your upcoming Capital Campaign, and bring in those big dollars to support your next effort, see the Charity How To top-rated step-by-step guide:  How To Create A Successful Capital Campaign: New Money For Small and Large Nonprofits Alike.